Please take a minute to visit our store site and shop

some of our favorits handmade alpaca items.

Check out our latest farm photes

What Is a..."SURI ALPACA"
The Suri  (pronounced "sir' ee")  originates from the
Andes Mountains of South America.
It has evolved from the rare and still-wild "Vicuna". The Alpaca is also cousin to two other camelid family members: the "Llama" and the "Guanaco".
Suri alpacas are extremely rare.  They represent only a very small percentage of the world's alpaca population.  In North America, their present population is approximately
18-percent of all North American alpacas, and will never increase beyond this percentage.  We believe that the Suri is a safe investment because of its rarity and inherent beauty.
The Suris have extraordinaery vigor and intelligence.  They are also easy to raise and have great adaptability to both hot and cold climates , which makes them an excellent
investment anywhere in the United States.
The Suri is a rare phenotype of alpaca which had been declining in South America.   They appear to be making an extraordinary comeback in the "newer" countries which
are breeding them . such as in the USA.
Tresured by Inca rulers , Suri fiber was reserved exclusively for Inca royalty , with the offense of anyone other than royalty wearing Suri fiber punished by death.  They have
been domesticated now for 6,000 years.
Today , it is estimated that less than 120,000 Suris exist worldwide ,  with one or two percent of thses being colored.  On the world market the Suri fleece is in very high demand
for its "luster" and "hand" (or softness) for the high fashion textile markets , and today commands a price double that for Huacaya fiber.  The Suri fiber is distinguished from
the Huacaya alpaca fiber by its unique characteristics.  The Suri fiber grows parallel to the body while hanging in long , seperate , non-crimped locks.  Suri fiber locks are made
up of high-luster fibers and drapes down the sides of the body in a twisted or flat form of various size.  Suri fiber has excellent luster , a slick hand , and extreme softness.  The
fashion industry , spinner , and weavers covet Suri fiber for its cashmere-like softness warmth , lightness and durability , which far exceeds sheep's wool.  Its fiber comes in many
different colors and can be dyed.  Suri fiber can blend with wool , silk and other high- quality fibers and can be knitted , crocheted or woven.
Ours is a growing industry , and the Suri market is strong.  As evidence ,  almost everymajor national auction consists of fifty-percent Suris and fifty-percent Huacayas , even
though Suris only comprise about  18-percent of the U.S. population of total alpacas.  Proof of this high market demand. 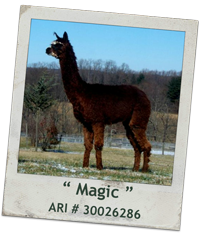 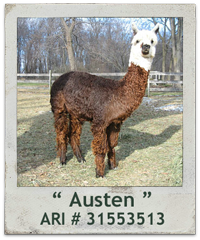 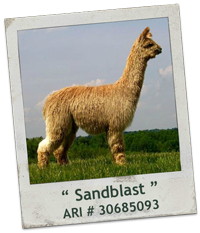 We are located in scenic Bucks County , PA...